HEADLINE AND STORY FROM THE TOPANGA MESSENGER 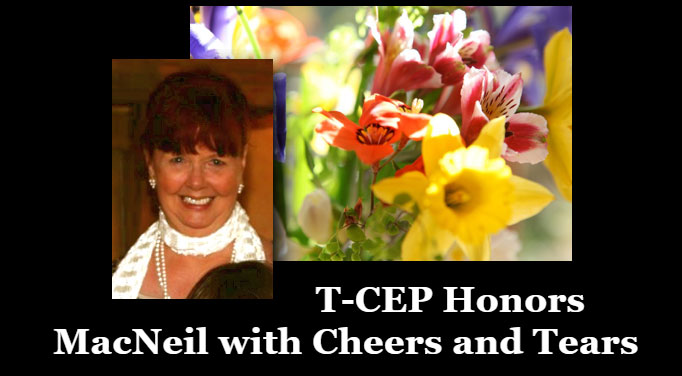 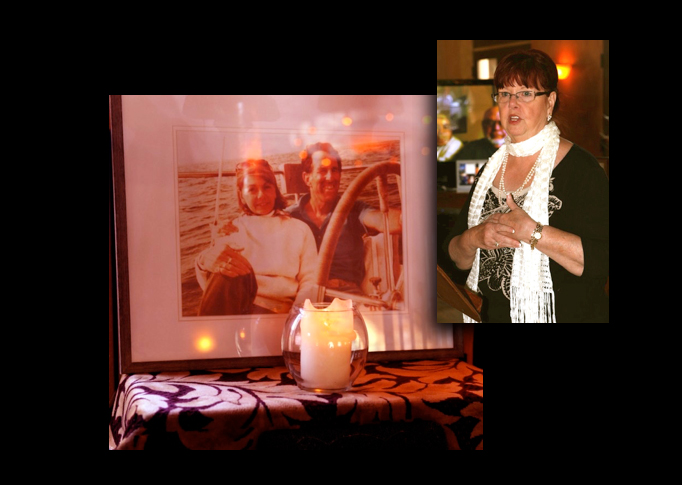 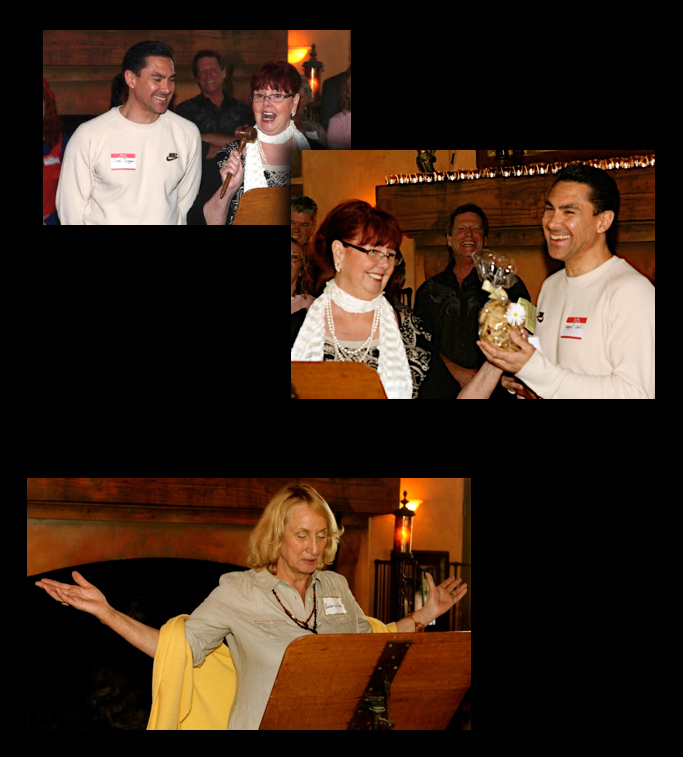 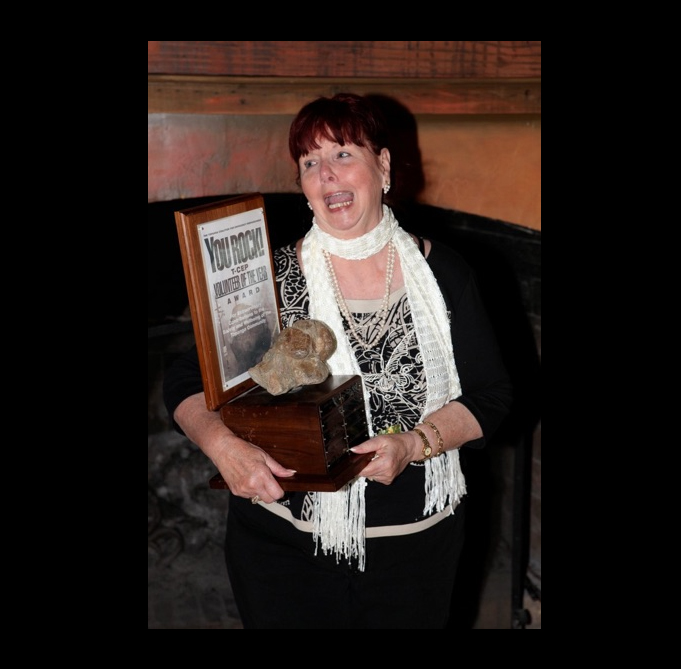 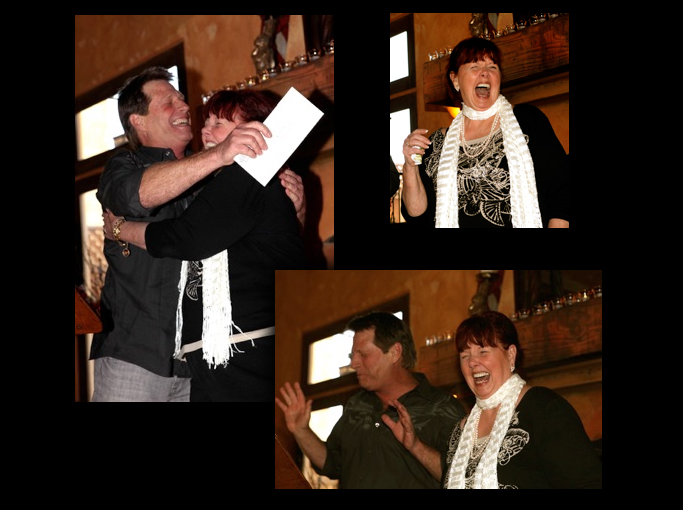 There is no obstacle or “road rock” large enough to prevent this spirited group from doing everything in its power to make Topanga a safer place. It was a gorgeous spring day and a picture perfect reason to live in Topanga as more than 75 volunteers and friends gathered at the Mountain Mermaid on Saturday, March 27 for the Sixth Annual Topanga Coalition for Emergency Preparedness (T-CEP) Volunteer Appreciation Brunch.

Supervisor Zev Yaroslavsky presented Pat MacNeil with an official commendation from the Los Angeles County Board of Supervisors. “This was signed by all five supervisors,” Yaroslavsky said. “Your shoes simply cannot be filled. We thank you from Topanga and the County.” These are the folks who you want to know in an emergency. With their CERT and HAM radio training and other useful skills, they are uniquely qualified to offer accurate and potentially life-saving information to Canyon residents in the event of a fire, flood or earthquake.

Pat MacNeil, Gabrielle Lamirand and Vic Richards started T-CEP after a devastating arson fire swept through the Canyon in 1993. Since then, it has grown into a well-respected, highly organized and essential part of the community interacting with county and state agencies in times of emergencies to keep Topanga informed and safe.

Currently, T-CEP operates the local emergency operations center (EOC) that is prepared to communicate with the various governmental departments during a natural disaster or local emergency. The EOC has a busy hotline at (310) 455-3000 and Website at www.t-cep.org where updates can be found.

But they gave much of the credit for their success and continued existence to its current chair, Pat MacNeil, whose indomitable spirit and determination helped turn a group of willing and able volunteers into an efficient, organized and reliable team of first responders.

So it was a bittersweet moment when, after 17 years with T-CEP, MacNeil stepped down as its chair and handed the gavel over to its new president, Oliver Duggal.

“They need a leader, there’s no backing out of this now,” MacNeil laughed as she handed the gavel over to Duggal. She also handed him a book, “Managing Crisis,” written by two Harvard professors and a very large bag of chocolate chip cookies. “So he can cope,” said HAM radio expert Norm Goodkin.

“I look forward to the challenge,” said Duggal, a business consultant who has lived in Topanga for eight years and has worked with Pat since 2009. “These are large shoes to fill, but we have a great board and people who are excited about the evolution of T-CEP.”

Call it the changing of the guard – or the passing of an era – but it was not a surprise.

MacNeil had announced her retirement one year ago after accepting a promotion with the American Red Cross of Greater Los Angeles, but will stay on as manager of the EOC; some feel it strange to think of T-CEP without Pat as its chair.

And in this unique community full of fiercely independent, creative types, that is no small feat to keep an organization functioning for nearly two decades.

Yet, after helping create one of the only, and certainly most effective volunteer disaster relief organizations in the nation, MacNeil will now be doing for the Red Cross what she did for T-CEP but on a much, much larger scale.

Volunteer of the Year

In yet another T-CEP turnaround, as she is usually the one handing out the awards and citations, the group conferred a final honor upon MacNeil: its “Volunteer of the Year Award” with her name boldly carved in brass on the spectacular “You Rock” trophy, complete with a small chunk of the actual rock that fell and blocked Topanga after a devastating landslide.

“For once in my life, I am speechless,” MacNeil said. “But what can I say, I own a piece of the rock; thank you for letting me serve you as chair all these years.”

“To get me to come out of my TV room during the NCAA is unprecedented,” said Supervisor Zev Yaroslavsky, who attended the luncheon in her honor. “But we are here to honor Pat. It is not a coincidence we have not had a devastating fire since 1993. Is it Pat or just luck? But lucky is just when preparation meets opportunity.”

Yaroslavsky emphasized that there is no question that T-CEP has made a difference. He said he gets hundreds of e-mail requests every week from local citizen’s groups requesting County sponsorship for their programs. But he said T-CEP was unique in the respect they actually did what they set out to do, making Topanga safer by organizing and committing to the process for the long term.

“It’s not just in Topanga but for those of us over the ridge; we are watching very closely those of you who have given us first responders who are intelligent, trained people who know what to do,” he said. “If all you have done is saved lives, increased public safety, decreased the risk, then, Pat, that’s a pretty good life. People are looking at the Topanga Survival Guide as a guideline. It’s not just in Topanga, it has spread across the country, so to partially quote Joe Biden, ‘this is a big deal, this is a big deal.'”

With that, Zev presented Pat with an official commendation from the Los Angeles County Board of Supervisors, with the symbols of T-CEP including walkie-talkies, radios, the Red Cross sign, and fire equipment.

“This was signed by all five supervisors,” Yaroslavsky said. “Your shoes simply cannot be filled. We thank you from Topanga and the County.”

While the tributes continued, guests enjoyed the lovely luncheon of quiche, salad, fresh muffins, coffee and champagne provided by the Inn of the Seventh Ray and hosted by the lovely and animated Gail McDonald-Tune and the gregarious Bill Buerge at their charming Mermaid villa on Callon Drive.

And thanks to the talented James Grasso, Fred and Carol Feer were able to join the tribute via video feed from Washington D.C.

When T-CEP began, Feer had already organized the Disaster Response Team (DRT), (now the Disaster Radio Team) and quickly aligned with T-CEP. He served as co-chair of T-CEP with Pat for many years, as well as co-manager of the EOC and author of the first Topanga disaster guide, The Fire Next Time.

He offered congratulations to the group and assured everyone that there was indeed a future for T-CEP after Pat.

“Just keep the fires under control,” he deadpanned.

“See? We need twice as many people on the board because we had to replace Pat,” Acker said.

The newest kid on the block is the IT Team, which is part of DRT and headed by Norm Goodkin, Buz Tarlow, Billy Stern and its newest member, Jarrett Iron, who works for MySpace and is responsible for networking the computers.

If the devastating 1993 arson fire was Topanga’s wake-up call, Pat MacNeil was among those who answered the phone. She and others knew they had to do something to avoid disaster.

Lamirand gave a short version of the history of T-CEP. She said that during the 1993 fire, Topangans learned that there was no accurate source of information on where the fire was and the direction it was taking. Canyon residents also learned that they were going to have to take care of themselves during a disaster. This inspired a series of meetings with several key leaders of Topanga Canyon organizations on December 16, 1993.

By the way, Lamirand said, that name did not come about until they were incorporated in 1995, when they initially called it TCEP. But that would soon change with Susan Nissman, Senior Field Deputy to County Supervisor Zev Yaroslavsky and lead coordinator of the Topanga Emergency Management Plan.

Nissman also worked with T-CEP to produce the landmark Topanga Survival Guide, a lively and colorful workbook for residents, full of photographs and personal stories of Canyon dwellers who have lived through fires, floods and earthquakes and are prepared for the next onslaught. The guide now serves as a blueprint for disaster programs for unincorporated areas of L.A. County.

A former magazine art director, Bill Buerge can take credit for much of the amazing graphic design. In 2005, the County spent $40,000 to mail two copies to each of the families who live in Topanga. Copies are available online at www.topangasurvival.org.

Last but not least, Michael Kleiner, Response Director of the American Red Cross of Greater Los Angeles, stepped up to defend his decision to hire Pat away from T-CEP.

“This is all about transition. She has left a real legacy that everyone here can use to keep this going and honor her for the past 17 years. The gifts she brought to T-CEP she is bringing to the Red Cross, so I am stealing her; that’s my excuse and I am sticking to it.”

At the end of the luncheon, Jack MacNeil brought out a huge basket of flowers for Pat.

Then the guests were offered lovely gerbera daisies, as well as a care package of chocolate chip cookies – totally appropriate for a gorgeous spring day, made even lovelier due to the hard work and dedication of those committed to making the Canyon safer.

Yet, as different as T-CEP might be after Pat, all agreed change was necessary to grow and become even better, which would be the best legacy for Pat, Vic and Gabrielle.