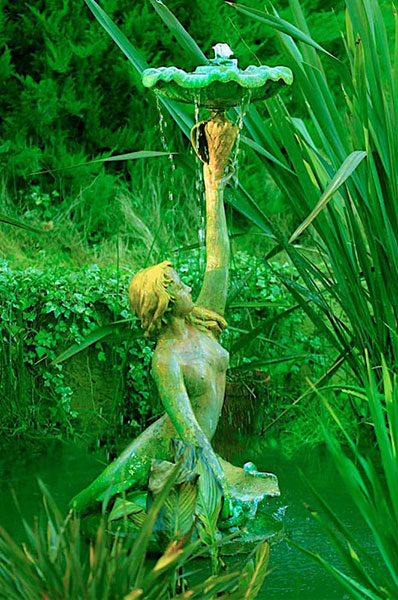 The property was originally built in 1930 as the Sylvia Park Country Club in the mountains above Los Angeles.

It was converted into a boy’s school for a time, and during World War II became a gambling house and brothel operated by mobster Mickey Cohen. It was reborn as an American Legion Hall, movie theatre, and later in the 50s as a gay nightclub called The Canyon Club.

In the 70s it reemerged as the legendary Mermaid Tavern featuring world-class music, and more. By the late 1980s it was a ruin, structurally unsound, and destined for demolition.

In 1989, a local artist bought the property and initiated a restoration that continues to this day.
Photographers from all over the world come to shoot at the Mermaid.

It is a local watering hole for town meetings and memorials. The Mountain Mermaid is a declared California historical, architectural, and cultural landmark.

The rest is history.

The Mountain Mermaid is a historic site and horticultural garden dedicated to the preservation of our architectural, cultural and natural history.