COPY AND PHOTO FROM THE TOPANGA MESSENGER

On August 7, generations of Chamber of Commerce Citizens
of the Year gathered at the Mermaid Tavern
(now called the Mountain Mermaid) for an historical photograph. 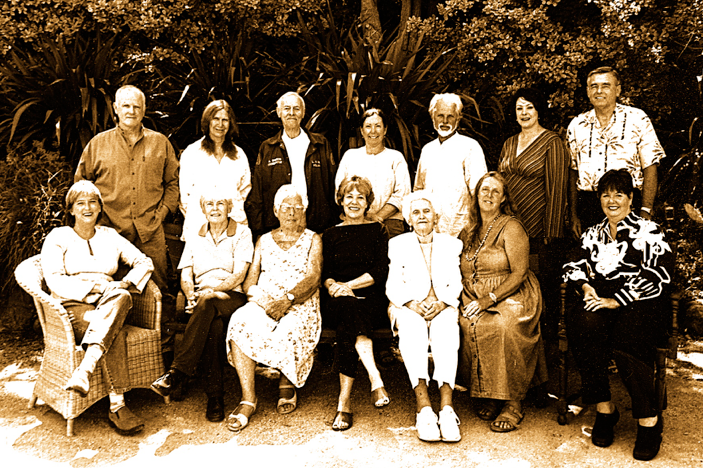 “We gathered together as many of the Citizens of the Year as we could,” said Michele Johnson, who is editing the updated version of “The Topanga Story,” the now out-of-print volume on the history of the Canyon. The group photo of these eminent Topangans will appear in the “Family Album” section of the book, which Johnson hopes to see in print by the summer of 2005.

Owner of the Mermaid, artist Bill Buerge provided cool beverages and the classic scenery. Harriet Swenson, elegant in a turquoise sweater and white summer suit, was accompanied by her daughter Nancy Williams. Harriet shared stories of community service and fundraising, then commented with a wink, one of our biggest money raisers was a basketball game, played in the Pacific Palisades gymnasium—the Topanga Chamber against the Hollywood Stars—where Chamber president Gary Venturi collided with Dennis Weaver (breaking the actor’s nose).

So much service, so much giving and caring throughout the years—thank you to all of our Citizens of the Year!