A fundraiser for young Topanga burn victim, Colin Spect, who was
rescued from his burning vehicle by actor Mark Harmon. 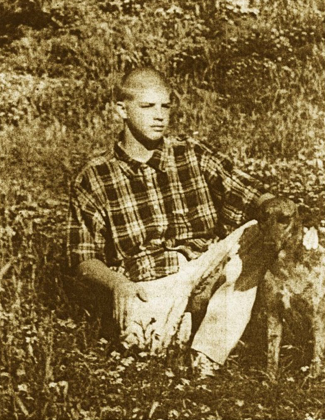 Colin Spect and his dog Annie in Topanga, 1995 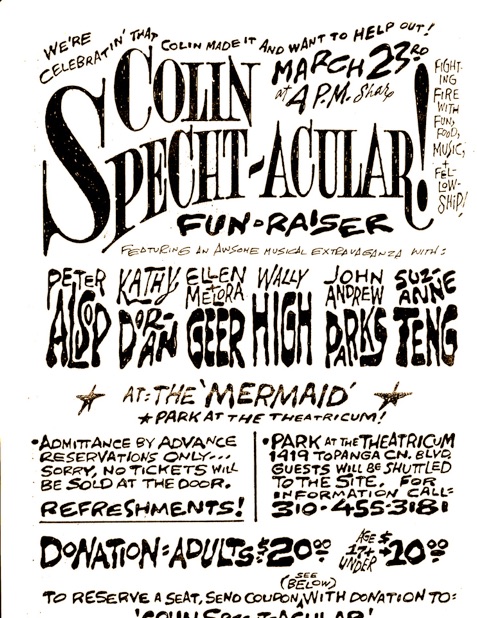 Flyer for the event highlighting performers for the musical extravaganza.

PHOTO ABOVE FROM THE MESSENGER. ANNOUNCEMENT FLYER DRAWN BY BILL BUERGE 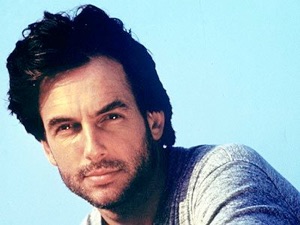 Article below from People Magazine, January 22, 1966

IT WAS, SAYS BRENTWOOD, CALIF., homemaker Jody Siegler, “the unmistakable sound of tragedy.” Seven months pregnant, Siegler was just sitting down for a rest at around 7 p.m. on Jan. 3 when, she says, “there was a screech and then a huge, huge crash.” Running to the window, she saw a harrowing sight: Across the street, a green Jeep Cherokee had flipped over and burst into flames. The 16-year-old driver, Erik McMurrow, managed to pull himself free from the burning vehicle, but his passenger, Colin Specht, also 16, remained trapped. As Siegler dialed 911—and the car’s paint began to blister from the intense heat—one gallant neighbor came running to the rescue: former St. Elsewhere star Mark Harmon.

“I just acted instinctually,” says Harmon, 44, who, with his wife, actress Pam Dawber, by his side, smashed the passenger-side window with a sledgehammer and, ignoring the flames, pulled Specht out. “His thighs down were pretty much on fire,” the 6′, 170-lb. actor told reporters. “I put him on the ground, rolled him over and lay on him to smother the flames.”

This story doesn’t quite have a Hollywood ending—yet. Specht last week remained in intensive care with serious burns and a fractured skull, but he is expected to recover. Remarkably, though, improbable numbers of celebs seem recently to be sweeping down from the screen and saving lives. In December, actor D.B. Sweeney, 34 (Fox’s Strange Luck), helped pull a man from a Vancouver, B.C., lagoon after his car slid into it off a wet road. And Baywatch star David Hasselhoff, 43, is a double do-gooder: he helped rescue an unconscious car-crash victim in Los Angeles last March by carefully moving her head in order to clear her airway; and in August, during a photo shoot in Malibu, he saved a 2-year-old girl from drowning in the ocean.

No recent hero has averted tragedy as coolly, though, as Kevin Costner. On New Year’s Eve, gale-force winds caused a power-line transformer to explode, igniting a large pile of wood only 100 feet from the actor’s Carpinteria, Calif., home. Downed trees blocked fire-fighters from reaching the inferno. “With those winds,” notes Andy Rosenberger, director of Emergency Services for Santa Barbara County, “that blaze could have done a lot of damage. Somebody needed to do something. Costner stepped up to the plate.” The Water-world star knew just what to do. Costner, 41, grabbed a garden hose and began to battle the treacherous flames. With the help of a neighbor, he put out the dangerous blaze in about an hour.

Perhaps the most remarkable thing about these incidents is how the stars have avoided significant postrescue publicity. Aside from a short interview with a local Santa Barbara paper, Costner has declined to comment; Harmon said little and has quietly kept tabs on Specht, calling the hospital to check on his progress. For his part, Hasselhoff, by his heroic roadway rescue, even proved that television can be educational. When an ambulance crew arrived to find that Hasselhoff had stabilized the unconscious woman’s breathing, shocked EMS workers asked, “Are you a paramedic?” Hasselhoff’s reply: “No, but I play one on TV”