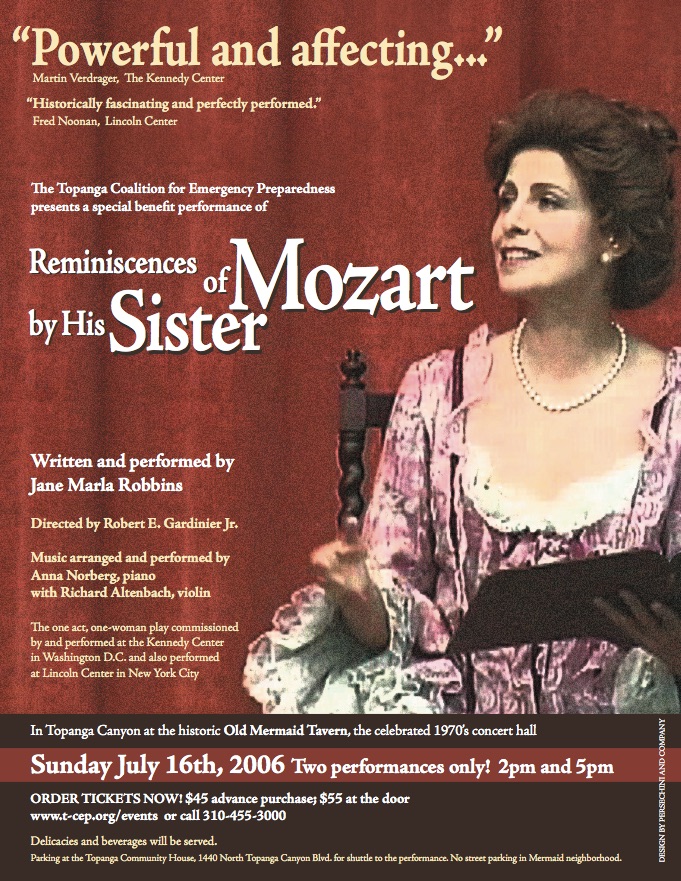 STORY BELOW FROM THE TOPANGA MESSENGER

Topanga Coalition for Emergency Preparedness (T-CEP)
plans to mark the 250th anniversary of the birth of Wolfgang Amadeus
Mozart with the local presentation of the critically-acclaimed
“Reminiscences of Mozart by His Sister.”

The one-act, one-woman show will be performed by playwright/actress Jane Marla Robbins at the Mermaid Tavern on Sunday, July 16 for two shows at 2 p.m. and 5 p.m. Pianist Anna Norberg and violinist Richard Altenbach will joining Jane in the day’s presentations.

This 65-minute play is an elegant, moving and thought-provoking exploration of Maria Anna Mozart’s relationship with her genius brother. With humor and pathos and in period dress, Jane illuminates Ms. Mozart’s life from her 70th to her 77th year. Jane was commissioned to write and perform the piece in 1995 by the Mozart Festival at the Kennedy Center in Washington, D.C. It was so well received that she was also invited to perform it at Lincoln Center as part of its Mostly Mozart Festival at Avery Fisher Hall.

Historically accurate, the play has both an unexpected and moving ending. On one level, the drama tells the tale of a burning talent that is unrecognized and unfulfilled. On another, it is a love story of deep betrayal and ultimate forgiveness.

Maria Anna, also called “Nannerl,” was an intelligent, educated, and passionate woman. She and Wolfgang performed together as children for all the kings and queens of Europe and were both considered “prodigies of Nature.” Like her brother, she was a pianist, teacher and composer. Although their father sometimes could not tell the difference between her compositions and Wolfgang’s, none of her compositions have survived. The audience is left to draw its own conclusions regarding the consequences of being not only the sister of a genius, but also a woman and musician in 18th century Europe.

Use of The Mermaid is being donated for this event, which is a fundraiser to support TCEP’s many critically important emergency efforts in Topanga. The piano is being donated by Keyboard Concepts in Hollywood.

Guests are to park at the Topanga Community House at 1440 North Topanga Canyon Boulevard. There will be a shuttle to the site. Only guests arriving by shuttle will be admitted. Tickets are $45 per person and include the performance and light refreshments. All tickets will be held at Will Call for pick up the day of performance. The two performances are expected to be a sell-out, so guests are urged to reserve tickets early. 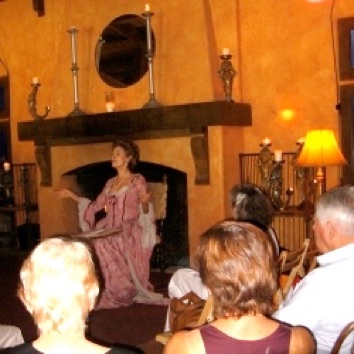 A Lovely Afternoon with Mozart’s Sister

July 16 was promising to be another hot day. A tree had fallen that morning so the power was out on Hillside, but at 10 a.m. when I arrived at the Mountain Mermaid everything there seemed OK. The grand room was already set up salon-style, filled with a variety of chairs, benches and couches to accommodate the expected audiences. The windows had been draped in blue to keep the light, and even more importantly the heat, out. The room was filled with white candles, and on the stage were a podium and a chair. Small spotlights had been mounted on the beams, a piano and a music stand were in place. The Mermaid was dressed and ready to be venue for yet another Topanga benefit, this time for T-CEP (Topanga Coalition for Emergency Preparedness). Jane Marla Robbins was scheduled to perform two matinee shows of her one-woman play, “Reminiscences of Mozart’s Sister.”

There was still much to do in the kitchen, however. Other volunteers began arriving, and the hundreds of watermelon, cantaloupe and honeydew melon balls—cut the day before by another group of volunteers—were mingled in watermelon shells and sprinkled with blueberries and fresh-from-the-garden mint. Hundreds of volunteer-baked chocolate chip and white chocolate macadamia cookies were arranged on platters. Gallons of fresh-squeezed lemon juice were turned into lemonade, and through all this activity hosts Bill Buerge and Gail McDonald-Tune expertly directed the many hands who were there to help, assigning specific tasks to each and going over the ‘game plan’ several times. It takes a lot of planning and organization to seamlessly entertain almost 200 people in an afternoon.

When people began arriving for the 2 p.m. show things were well in hand. The candles were lit, the ceiling fans were helping circulate the conditioned air and the room was surprisingly cool. (Gail told me later that to ensure the comfort of their guests they had rented an industrial-sized air conditioning unit.)

The two-minute warning was sounded and everyone settled in. Dawn Simmons, Public Information Officer of T-CEP, welcomed the crowd and gave opening remarks, noting how appropriate it was to experience an historic character of the 18th century in a landmark structure of the 20th century. She also requested that, since most people in the 18th century couldn’t afford cell phones, in their honor all cell phones and pagers be turned off, unless of course the ring tone was by Mozart. She then introduced pianist Anna Norberg, head of the piano department at the University of Tulsa, and violinist Richard Altenbach, who plays in the first violin section of the Los Angeles Chamber Orchestra and is frequently concertmaster for the Mozart Classical Orchestra.

The duo set the mood, expertly performing several of Mozart’s works including “Rondo Number 1 in D Major,” “Theme and Variations from Sonata in A Major,” and “Ave Verum Corpus.” Then Jane, uh, Maria, took the stage.

I confess I knew little of Mozart’s life before that afternoon, but the performance was both entertaining and informative. Standing at the podium and referring to her red leather-bound volume with gold-leaf pages, Jane, uh, Maria, in a light Austrian accent, presented a chronological unfolding of the stories of their lives, occasionally punctuated by Anna playing appropriate music passages. Jane/Maria would occasionally pull a letter from the red volume and perch on the chair to share it with us. One letter from her brother was written with alternating passages upside-down.

When Wolfgang Amadeus Mozart was born in Salzburg in 1756, his sister Maria Anna, nicknamed Nannerl, was four. Their father, Leopold, was one of Europe’s leading music teachers and a successful composer, but when his son’s remarkable musical ability began manifesting itself, when Wolfgang was three, he gave up his own career to manage his son’s and daughter’s musical education. Maria was an extraordinary composer in her own right—in fact their father couldn’t tell her compositions from “Wolfie’s”—and for a time the brother and sister team performed for the crowned heads of Europe. But eventually Wolfgang’s career took precedence and Maria languished in Salzburg.

Maria’s reminiscences recounted accomplishments as well as disappointments—in this year we played for this royalty and this extraordinary event happened, and Wolfie was only this old. Her use of language was eloquent, the carefully chosen words themselves as important as the stories they conveyed. Her tone was measured and matter-of-fact, but as she related stories of the increasing estrangement from her family she worked hard to rein in her emotions.

It was fascinating to see the different nuances in the two performances Jane gave in that afternoon, and I wondered if the fact that the second show seemed a bit more intense could be attributed to the fact that she’d had the first show to “warm up,” or if it was a reaction to having a larger audience. Or perhaps I had been watching Maria the first show and Jane the second. Whatever the reason, it was additional education I received about the art of performing from a very talented actress.

At the reception after the first show I also learned the appropriateness of one of the refreshments offered. I don’t know if it was a premeditated choice, but I was told by Topanga artist Karen Silton that iced coffee with whipped cream, kaffee mit schlag, is a Viennese specialty. At age 13 Karen had visited Vienna and every afternoon was served that treat.

It was very special afternoon, on many levels. It made me feel lucky to live in a town where generous folks open their home and people pitch in, creating a forum for a talented performer, and by helping fund T-CEP the entire community benefits.

As our ex-editor Colin Penno would say, “Ah, Topanga.”