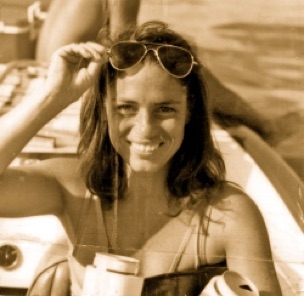 Terry Valente relaxes on a boat in La Paz, Mexico, circa 1973.

On August 30, 2007, at 11:11 a.m., as this issue of the Messenger went to press, Theresa (Terry) Valente died peacefully in her bed at home after a long and courageous battle with cancer.

Terry, who made her home in the Canyon for the past 34 years, is survived by her husband Joe, her daughters Melissa and Erin, and her son Gabe. A tribute to Terry’s life and many contributions to the Topanga community will be published in the next issue of the Messenger; comments from her many friends and family members are welcome (deadline: noon, Monday, September 10).

A memorial service is scheduled for 11:00 a.m. on Saturday, September 8, at Our Lady of Malibu Church, 3625 Winter Canyon Road, Malibu, California, followed by a reception at 2:00 p.m. at the Mountain Mermaid in Topanga. In lieu of flowers, the family requests donations be made in Terry’s memory to the Topanga Community Club, a cause she loved and served for many years, at 1440 N. Topanga Canyon Blvd., P.O. Box 652, Topanga. Please contact family friend Sunny Lannutti at 310-560-5022 for further information.

Touching Hearts and Souls
in the Canyon

The memorial on September 8 for Theresa Valente at Our Lady of Malibu Church was, said friend Pat Mac Neil, “A calm, peaceful loving service. You came away feeling better.” The church was packed. This might have surprised Terry, who, though she was involved in nearly every organization in the Canyon, always walked softly, leaving a light, indelible footprint.

When Terry passed away on August 30 from a long bout with lung cancer, she left behind a loving family – her husband Joe, daughters Melissa and Erin and son Gabe. Terry grew up pretty and petite in Cedarburg, Wisconsin. As her daughter Melissa said in her moving eulogy, her mom “did not come into this world alone. She brought with her a fraternal twin brother and had four other brothers and sisters awaiting their arrival.”

“Mom was a carefree, happy child who loved to play on the steps leading to the creek which ran through the town. She would spend countless summers walking with her friends to the community pool where they would play Marco Polo and get into girly mischief.” Melissa credits that place, where Terry spent the first 16 years of her life, with turning her into “the woman we have all fallen in love with – Mom had the biggest heart that I have ever seen and I believe it came from her cherished time in Cedarburg.” In her final months, Terry took her children to Cedarburg for the first time. Seeing the town — the woods where her mom walked, the pond where she ice skated, the houses without walls between them — gave Melissa a new understanding of her mom. “The sense of community and friendship that was gained from living in a small community allowed mom to feel right at home when she discovered the small town of Topanga.”

Terry’s journey to Topanga came after some detours. In the late ’60s, her family moved to California, where she lived in Malibu and attended Santa Monica High School. After graduation, she became a French major at UC Irvine. There she met Joe. He was traveling the country in his van and picked up a hitchhiker who wanted to be dropped at the beach near Irvine. It was pure serendipity that Joe met Terry on the sand. When he returned to his Virginia home, they continued a long-distance relationship until they finally married three years later. She joined him in Washington, DC, for a time, while he worked for the FBI and she, with her excellent head for figures, worked in a bank.

They eventually came back to the California coast, settling in Topanga in 1974. From the beginning, Terry invested herself wholeheartedly in her family and the community. Shelley Coulson, Terry’s best friend and business partner, met Terry in 1979, introduced by “Steamer,” the butcher at Fernwood Market. “He figured we both had a lot in common.” They had husbands and family members who worked for Topanga Underground owner Richard Sherman and were both pregnant with their first babies.

“We became best friends fast,” says Shelley. Terry loved her children “more than anything in the world,” Shelley adds, but secondly, she loved Topanga. She volunteered “endless hours” for the Topanga Co-op Preschool. Then did it all again for the Topanga Woman’s Club (now the Topanga Community Club). She was a one-woman band, keeping the Club’s books, working for Topanga Days and the senior dinners, and finally taking a turn as president. And, of course, every Easter she was Topanga’s best bunny. For years, for the annual Easter egg hunt, she dyed hundreds, if not thousands, of eggs, hid them and even dressed the part, playing the Easter Bunny in full regalia.

As her children grew, she threw herself into their activities. “I considered Terry a gem of a person in every way. She was an amazing Girl Scout leader for our daughters,” remembers Rebecca Catterall. Sunny Lannutti’s daughter Sondra had been Erin Valente’s best friend, “since they were sucking their thumbs,” remembers Sunny. Terry and Sunny were Co-op moms together. “She let me in. I was lucky,” Sunny says. “She was a second mother to SondraÉvery solid, kept everything together. She was kind and loving and it showed in her kids.”

When Terry’s children started Topanga Elementary, Terry worked at the school, becoming a room mother and running the magazine drive for the Parent Teacher Organization. As a devout Catholic, she taught Sunday school at her church. She continued as a volunteer in her later years, joining T-CEP’s Hotline Team.

Though she made a career of volunteerism, she had a professional career as well. Twenty years ago, after working as a building permit expediter for architect Cary Gepner, Terry started her own expediting business with Gepner’s enthusiastic support. She ran it first out of her home, then her mother’s home, and finally opened an office in Malibu. “She developed a wonderful reputation,” says Gepner. “She was dedicated always to her clients. She was ethical, straightÉ She had a great life. I miss the hell out of herÉ She gave beyond measure.” As Shelley, her partner, puts it, “She helped people realize their dreams.” Mortgage broker Dorothy Reik adds, “No houses in Topanga would have gotten built without Terry Valente – certainly mine never would have.”

Dorothy was one of the dozens who came together at the Mermaid after the church service, where owner Bill Buerge once again opened his door and heart to those mourning one of the Canyon’s distinguished leaders. Guests stayed on for hours, looking over dozens of photos of beautiful, dark Terry, with her warm smile, pictured with her family. They shared stories and noshed on lasagna. Present were, as Dorothy said, “The ‘Who’s Who’ of Topanga,” representing all the roads that Terry had taken. Pat and Jack Mac Neil, Wendy Forrester, Penny Chavez, Susan and Arthur Nissman, Nancy and Steve Maples, Jeanne Mitchell, Mary Colvig-Rhodes, Susan Clark, Michele Acker, Nancy Crater, Terry’s brother David Troy, Vicki Norwood on horseback and many, many more came to honor the person who had touched so many hearts.

She was, according to her friends:

“A fighter for the good and a person to trust” – county rep Susan Nissman;

“A goddess of green and goodness” – realtor Tom Bates;

In Terry’s spirit, let us all follow Melissa Valente’s last advice to those leaving her mother’s service: “I want each and every one of you to do me a favor. Walk out these doors with my mom’s spirit in your heart. Live your life as my mom always did, with your heart open to the world and your soul touched by God. Tell the people that matter most to you how much you love them. Always follow your gut feeling because it is always right, be kind and patient with whomever comes into your life and live simply everyday with laughter and love in your heart.”