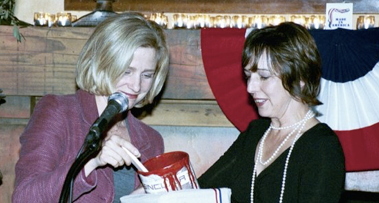 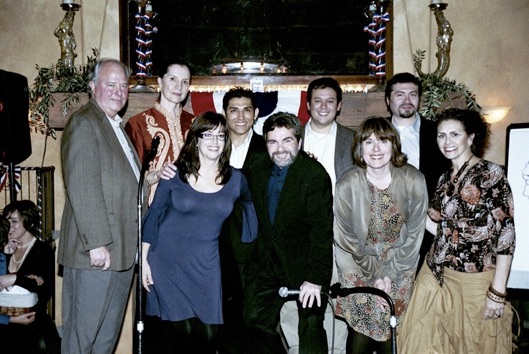 Looking in through the window the capacity crowd filling the Mountain Mermaid in Topanga on Friday evening, February 29, one might have been hard pressed to identify what kind of event they were observing. Was it an art opening? There were local gallery owner David Green and artist Rebecca Catterall, and everyone looked pretty arty. Could it be a school fund raiser? Topanga Charter School Principal Joyce was on hand, but where were all the children? Oh look, there’s Supervisor Zev Yaroslavsky. Maybe it’s a political rally—or town hall meeting? Could the subject be fluoridation? For whom is Karla Morrison voting? There’s Adam Silbar, who always has something interesting to say, but what was Michael Anapol doing off work from Abuelita’s on a Friday night? And who was that lovely woman with him? Super-realtor Elaine Hanson seemed to be in five places at once, and over there’s librarian extraordinaire Barbara Metzenbaum. The Rhodes—Shawn and Dawn—are strolling about and clean up really well. The list of those in attendance would read like the Topanga phone book (if we had one). Whatever it is, must be big doings—Katie Dalsemer, photographer for the Messenger newspaper was taking pictures and editor Lee Michaelson was milling with the crowd, meeting and greeting. Why was everyone drinking? And who called the cops—not a lowly patrol officer, mind you, but a lieutenant from the West Hill Sheriff’s station decked out in full uniform?

The event, of course, was the 59th Annual Topanga Chamber of Commerce Citizen and Business of the Year Awards celebration for 2007. And this uniquely Topanga event is a combination of party, business mixer, officer installation, entertainment, rally, fund raiser, media event, soap box for speechmaking and all-around celebration of what is best in our community. Although the Academy Awards presentation may have hit an all-time low this year, the Chamber Awards are in full gear, attracting more people than ever. In fact, this year’s turnout of guests eager to fete the honorees took event organizers by surprise. On Tuesday of the week of the event, a healthy crowd of 70 guests had registered. When more than twice that number turned up on the night of the event, volunteers were sent scurrying to the store for additional cases of wine. Still, they managed, like the business pros they are, and a grand time was had by all.

Hosted once again at the Mermaid—a local architectural treasure—by Gail McTune and Bill Buerge (two Topanga treasures themselves) who often share their beautiful and artistic home with the community, the evening had an elegant but comfortable and familiar feel to it. It was a mixture of old and new, traditional, but with a feeling of change in the air—after all, it is an election year.

At the start of the official proceedings, led by Susan Nissman, the rafters filled with the voices of the community coming together to recite the Pledge of Allegiance. The stunning Catherine McClenahan then took the stage to sing the National Anthem. Having courageously faced her own health challenges as of late, she and her soaring voice were appreciated all the more. Long may she sing.

“There is no place like Topanga.” observed an appreciative Supervisor Zev Yaroslavsky. “It’s a unique place and I’m always proud to be here, even if the rattlesnakes outnumber the population.”

Busy as he is, it’s to his credit that Supervisor Yaroslavsky so often makes time for Topanga. Some of his involvement must be attributed to his capable deputies in the field, Topanga’s own Susan Nissman and Cynthia Scott, both of whom participated in the evening’s festivities. There were many in attendance who would have welcomed political discussion but this was more of an evening for celebration than hard questions.

Instead, improvising an oath of office as he went, Yaroslavsky officially inducted the incoming 2008 Topanga Chamber of Commerce officers and board members, as new Chamber president, bright and smiling Kamakshi Hart, took over from the ever-capable Rebecca Catterall.

President Hart describes her group as “made up of Topangans—an eclectic, independent and accomplished array of professionals. To other Chambers we are unusual. What a surprise! We’re smaller and I’d say lighter.”

“Kamakshi brings love and life and boundless energy to every endeavor in her life,” commented supportive guest Audrey Rubin.

Chamber members kept the spotlight focused on the stars of the evening, this year’s award honorees: Citizen of the Year, Debra Silbar; Business Of The Year, Royer Studios; Storefront Business of the Year; Topanga Acupuncture Bodywork and Chiropractic; and in a new category, Youth Citizen Of The Year, Amelia Weiss.

A beaming Debra Silbar, decked out in basic black and pearls, was elated to be honored. Looking model-esque and radiant, although just having been hospitalized with a bout of pneumonia, Silbar worked the room of fans with her down-to-earth charm. Silbar was recognized for her vast (and I mean vast!) fundraising efforts on behalf of Topanga Elementary Charter School, where she revitalized the parents’ booster club, helped to found a science lab and community garden, and provided leadership to numerous other causes. Silbar was also praised for her role in organizing concerts and fundraisers for a myriad of other community projects. All this is in addition to having made available to a variety of communal causes and meetings, the rooms and hospitality of Abuelita’s, the restaurant she owned with her much appreciated and sociable husband Adam Silbar, until they sold it last year.

Silbar was described by an observant fellow parent at the school, Judi McCandless, in a way that reflects the thoughts of so many, “She’s truly a dynamo of wonderfulness. The woman just never stops! You get the feeling she can do anything.”

Business of the Year, awarded to Royer Studios, was happily received by its Chief Executive Officer Bruce Royer. The studio, located in Topanga, works strongly with art and animation, offering classes to local children. Much of the product produced by Royer Studios is educational and strives to present healthy, emotional instruction and choices for children.Royer is proud of developing the ongoing California Teen Advocates for Safe and Tobacco-Free Schools campaign.

His healthy, nurturing and alternative concepts to filmmaking and education fit well here in Topanga.

As the award winner for Storefront Business of the Year, owner Nancy Marcucella of Topanga Acupuncture, Bodywork and Chiropractic is an apt choice. With her gentle manner and soft voice she is a natural in the field of skilled healing arts. Shy and modest vocally, petite and pretty Dr. Marcucella expresses herself best through her hands. There is always a steady stream of clients mounting the stairs at Pine Tree Circle for her talented services. Her professional and relaxing offices have been the destination of those in physical discomfort—suffering from stress, or just in need of revitalization—for over twenty years. Creating a healing environment that is calming and relaxing, Dr. Marcucella has kept many Canyon residents balanced and recharged.

One aging and beleaguered local resident professed effusively, “Nancy helps everyone. She is always open and friendly. Whenever I’m really hurting, she always fits me in for a message. Her services and skills are invaluable.”

The final recipient of the evening was the young, enchanting and poised Amelia Weiss, Youth Citizen of the Year. It was a wonderful idea by Barbara Allen and the Chamber create a new award that would encourage the movement of teen entrepreneurship and community service blossoming in our Canyon.

Weiss, an alumna of Topanga Elementary School, is now a sixteen-year-old student at Chaminade High School. She has been a frequent contributor to the Messenger, with her amusing column, “Amelia’s Fun Facts.” In a more serious mode, this versatile young woman created a program called “Beanies For Babies,” the goal of which was to hand- knit baby caps and send them with love to infants in need around the world. Weiss went into classrooms and inspired other teens to join her in knitting beanies on behalf of this worthy cause. More recently, Weiss has also been involved in supporting an orphanage in Tijuana. Just this February, she organized a group of volunteers who traveled to the El Faro Orphanage to bring supplies and attention to the children there. When asked if it was difficult to keep from crying when arriving and encountering the children and their underprivileged circumstance, she replied, “No, we cried when we left.”

The evening presented a stellar group of Topanga Citizens and admirable, thriving businesses. Their very actions, goals and unselfish acts define what our community is all about.

The actual awards themselves were colorful ceramic paint cans which are the signature design of innovative Canyon artist Rebecca Catterall, while Ms. Weiss received a work designed by accomplished and whimsical animal artist, Robyn Feeley.

The hors d’oeuvres from the Canyon Bistro seemed to go fast. The one I managed to get hold of was, of all things, created with macaroni and cheese, and it was delicious.

The event coordinators—Gail McTune, Robyn Feeley and Claire Hadley-Davis—and all the Chamber volunteers should feel proud to have produced such an inspiring evening.

COPY FROM THE TOPANGA MESSENGER