A day-long workshop to brain-storm ways to preserve the canyonin the face of constant change and population pressures.

Under auspices of the Topanga Watershed Committee of the Resource Conservation District of the Santa Monica Mountains. 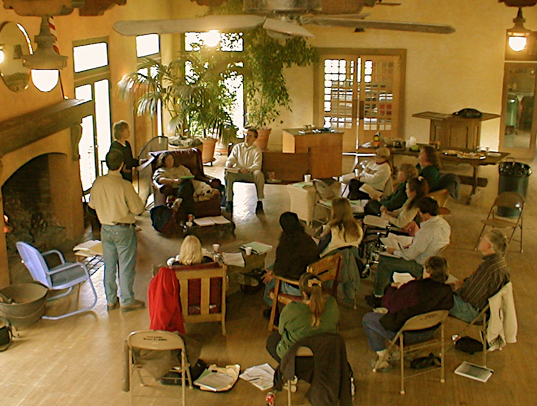 “Our goal here is ambitious to say the least.”

Those were Rosi Dagit’s opening words

at the Topanga Tomorrow Workshop, a Watershed Committee event

held at the historic Mermaid Tavern. The goal was to review all the documents

with policies pertaining to Topanga and identify which

are conflicting or are just plain missing.

As it turned out, with the North Area Plan looming on our horizon,

due for an October 24 vote by the Board of Supervisors,

the meeting narrowed its focus.

It became a forum to dissect the North Area Plan.

About 30 people attended the all-day workshop, held Saturday, September 30, which was sponsored by the Resource Conservation District of the Santa Monica Mountains (RCDSMM). The Mermaid Tavern is surrounded by views that brought home to participants just what Topanga has to safeguard. Each person there had to read through inches of documents during the days before the workshop before they could attend. The event had been publicized for months and was open to anyone in the Canyon.

The plans most affecting Topanga, soon to become law superceding other plans, are the North Area Plan and the Local Coastal Plan. The Topanga Creek Watershed Management Study and the Community Standards District, our bids for self-regulation, were also on the agenda.

THE NORTH AREA PLAN UP FOR A VOTE

After working to revise the Watershed Committee’s mission statement and doing initial work on the Watershed Management Study, everyone agreed to jump forward through the agenda to tackle the North Area Plan.

The North Area Plan is a component of the L.A. County General Plan that will dictate land use in the unincorporated areas of the County outside of Coastal. In Topanga it will cover the area from Cheney Road on one side and Old Topanga Road near Skyline on the other to the Calabasas city line.

The new plan will take the place of the Malibu/Santa Monica Mountains Interim Area Plan. It affects only new construction on land that has not been previously subdivided. As it states, “Existing legal lots are not affected, and may be developed-following current development requirements-regardless of lot size.”

What it does do is regulate development of open land in the unincorporated areas of the County. On the whole, the document is more restrictive than the old Interim plan it replaces. As Laura Shell, aide to Supervisor Zev Yaroslavsky, later insisted, “The plan is much stronger than the Interim, much clearer. It reduces density on the average by 30% over the Interim Plan.” For example, in Topanga, a landowner has already applied to build three homes on a site above Ed Edelman Park. Under the new plan, Shell said, the parcel would only have been zoned for one home. 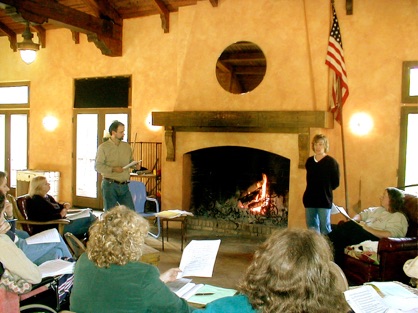 It’s better than the old one,” Roger Pugliese of TASC (Topanga Association for a Scenic Community) agrees, “but it has some loopholes in it that encourage development.” And Pugliese pointed out to the workshop that as it languished in Regional Planning it has been watered down. “In the last year it has been chipped away at by various interests.”

Laura Shell agrees. “We do see it as a problem.” At a hearing last June, she explained, Regional Planning changed the map allocating the amount of density allowed. Two large areas were affected. “Some properties had an N20, and the Commission changed them to a N10 between Kanan Road and Las Virgenes,” said Shell. This means the land, adjacent to Paramount Ranch and Malibu Creek State Park, is now zoned for one house per ten acres. “Zev is asking that that be reversed,” Shell said. What are the chances the rest of the Board will go along? “Who can say? I wish I had that crystal ball.”

Even more alarming, the Warner Financial Land property near the Calabasas landfill was upzoned to a point even above what it had been in the Interim plan. Areas designated N20 were rezoned N10; those designated N5 were re-designated N1. This area is next to the Liberty Canyon wildlife corridor which is barely holding on by a thread as it is. The corridor at one point narrows to a freeway underpass, and its existence could be threatened by the planned development. Yaroslavsky will also request that the land be downzoned to reflect the earlier version.

Closer to home, says Roger Pugliese, is a 30-acre parcel in Calabasas that backs up to Quest Ranch bordering Topanga on the Valley side. That parcel was designated N10 in the March 1999 version of the Plan. Now it is upzoned to N2. “I am shocked at the amount of properties that have been upzoned,” said Pugliese. 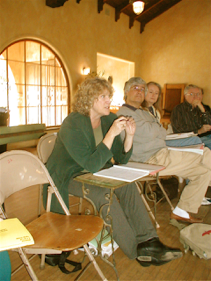 Some might ask that, since no area actually in Topanga has been upzoned in the North Area Plan, why should we worry? Well, as workshop members pointed out, besides our larger concerns for the parks and the environment throughout the area, Topanga is specifically affected in one big way: traffic. An increase in traffic, participants pointed out, could bring more smog to our skies, oil to our waters and a disastrous change in our rural lifestyle.

The Plan suggests little that can help the traffic situation. It describes “a substantial increase in commuter traffic,” even at present levels, with no further build-out. As remedies, it suggests expanding public transit and corporate car-pooling, even encourages bicycles to alleviate congestion. It also suggests adding one lane in each direction to the Ventura Freeway. But other than calling for periodic passing and turnout lanes on Kanan Road and Las Virgenes/Malibu Road, there are no suggestions to ease congestion on the north-south arteries, like our own Highway 27.

Susan Nissman, Yaroslavsky’s Senior Field Deputy, who attended the workshop “as a private citizen,” held out some hope that a park-and-ride plan might be devised for Topanga Canyon. If the land can be nailed down for a parking facility in the valley, there may come a day when commuters can be shuttled into town. Nissman does not see that as a cure-all, though, just as a stop-gap measure. That’s why the idea put forth in section VII-134 of the North Area Plan is still our best hope: “Limit the intensity and traffic generation of new residential, commercial, office and business park development projects to that which is consistent with achieving and maintaining roadway performance objectives and protecting the integrity of existing rural communities”

SORTING OUT THE LANGUAGE

The language in the Plan is generally stronger than in the Interim Plan, claimed Shell. Rosi Dagit said she was encouraged by the guiding principle of the plan: “Let the land dictate the type and intensity of use.” At one time, she said, that language would never have been seen in a County document. But, workshop participants discovered, the language in this version had been somewhat watered down from earlier versions as well. In one place, members found that the wording “discourage plan amendments” was eliminated. Shell countered that any land use plan must allow amendments. “We can’t prohibit people from applying for an amendmentbut we don’t have to grant it.” Shell believes the language has held up fairly well. “In general, has the plan maintained its integrity?” she was asked. “Yes, definitely,” she responded. At the workshop, wording changes were suggested that could strengthen the document, though some warned that the time for new wording changes might be past. Returning to language in an old version of the Plan might be allowed, but new wording would open up the process to review. Shell says Zev hopes the plan, warts and all, will finally be passed before more developments get approvals under the old, less restrictive Interim plan.

Even if strong language is included, the County doesn’t have a very good record on follow-through. Shell agreed that under the Interim Plan, a great number of amendments to ease zoning for certain landowners were granted. That suggests one more problem with the plan. Any plan is only as strong as its implementation.

As an example of just how acquiescent the County is on development, the Supervisors just unanimously approved a huge 2,545 home development in the 5th district near Newhall. This was more homes at one fell swoop, Shell pointed out, than the potential build-out of all the unincorporated lands covered by the North Area Plan. 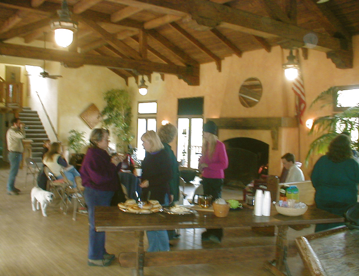 As the workshop wound to a close, at the urging of Roger Pugliese, the group decided to draft a letter from the Watershed Committee to the Board of Supervisors calling for downzoning the land that had been upzoned and strengthening the language to reflect the March, 1999 version of the North Area Plan. That letter is posted in the new Community Action forum on TopangaMessenger.com and on TopangaOnline.com/twc/nplan/. You can also find online several sample letters calling for the rollback in zoning that can be downloaded, revised and sent to the County Board of Supervisors. Send your letter to any of the five supervisors–Zev Yaroslavsky, Michael Antonovich, Yvonne Burke, Don Knabe, or Gloria Molina at 500 W. Temple Street, Los Angeles, CA 90012. The sample letters and information online were provided by the Cornell Preservation Organization of Agoura, which has been fighting the downzoning all the way.

Anyone can attend the public meeting to voice objections before the vote by the County Board of Supervisors which will be held downtown at 500 W. Temple Street on Tuesday, October 24. The meeting starts at 9:30, but new business will probably not be on the agenda until about 10:30 a.m., Shell reported.

NEXT FOR TOPANGA TOMORROW

A lot of the usual suspects who have already donated hundreds of volunteer hours to support Topanga attended the workshop, along with some new blood. Bill Buerge, owner of the Mermaid hosted and Rosi Dagit acted as moderator. Among those attending were David Gottlieb of the RCDSMM, Rabyn Blake of the Topanga Watershed Management Committee, Realtor Casey Kelly, Earth Day organizer Woody Hastings, and Town Council board member Vic Richards.

Feeling that its work isn’t yet done, the Topanga Tomorrow Workshop will meet again on Saturday, November 18, at the library at Top O’ Topanga from 9:00 to 4:00. Everyone willing to do the homework is invited. A small fee is requested to pay for lunch, so call the RCDSMM at 455-1030 if you plan to attend. 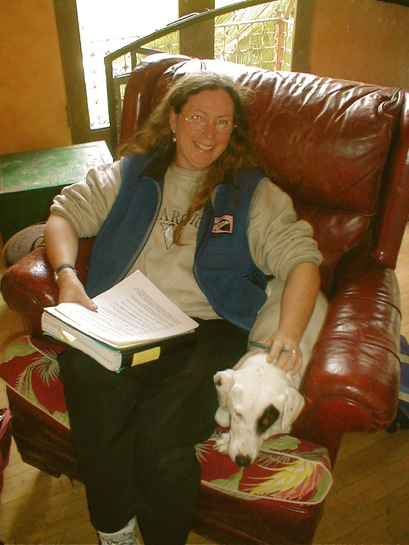